This morning, after sleeping in late, I woke to find that my parents, who had come to San Diego to visit me and my sisters for Easter, were gone.  They’d already packed up the car to go back home to Los Angeles and had left without saying good bye.  They probably just didn’t want to wake me.  But I was upset that I didn’t get to say, “Goodbye, I love you,” and give them a kiss before they left.  I ALWAYS do, and it drives me crazy not to.  That’s how it is in our family – anyone leaves the house, whether it’s to run to the grocery store for milk, or to drive to LA from SD – we always give each other a kiss and say, “I love you.”

So I texted my mom later, and she said, “Make sure you guys eat the fruit before it goes bad, don’t forget to send out your graduation announcements…we’re almost home, love you.” I replied with, “Thank you Mommy, drive safely, love you.”

An hour and a half later I called home to ask my dad a question.  He never picks up right away, he always lets it go to the voice recording.  So I started my voice message, picturing him sitting by the phone, waiting to hear my voice to pick up.  Instead, my very shaken up mother picked up, told me that they’d gotten into an accident, and that my dad was in the hospital.  She was still in shock, and wasn’t making any sense. 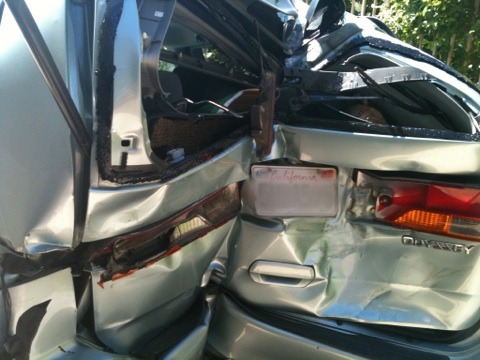 They were waiting at a red light when a truck, going about 60 or 65 mph, plowed right into the rear of the car, sending them across the intersection in cross-traffic, and squishing our family minivan like an accordion.  The guy was likely texting.

Everyone is OK – including my dad, mom, and all four pups who were in the car. (Cooper and Mimi’s little kennel was completely caved in.)

It’s unfortunate that these are the kind of reminders that reinforce it all the most – the ones that threaten your entire world. Lucky for me it was merely threatened, and not completely taken from me.

I don’t want to wait for another accident, another near-tragedy, to realize what is precious to me, what matters.  I want everyone that I love to know that I love them, and I want them to know just how much they mean to me.  I want to see the beauty in every day, and realize all the ways that I’m blessed.  I want to stop worrying about the little things.  It’s hard not to sometimes, but at the end of each day, I want to be able to look back and realize what truly matters.  At least once every day.

I hope my mom knows that I realize that it’s true, that we have the same heart.  And I hope she knows that I couldn’t be happier about that.  I hope she knows how thankful I am for everything she’s struggled for, because it’s all been for us, for me and my sisters.  She’s the smallest one in the family, but the strongest.  She would carry the weight of the world on her shoulders for her babies, she has.  She looks at a tree, blooming with vibrant flowers and is in absolute, genuine awe.  Everything that is beautiful in the world, she could see a hundred times, but each time, it’s as if it were the first time she’d ever laid eyes on it, she is completely lost in wonderment.  Her enthusiasm is enlivening.

I hope my dad knows that he has the biggest heart of anyone I’ve ever known, my sisters and I are his world.  He makes me smile like no one else.  There is no one on this earth like him.  The songs he sings are my favorite songs, the ones he belts out in the car, at home, out in public.  It wouldn’t matter who else came out to watch our games, he was the only one that mattered.  There is no one else in this world I trust more.  There’s never been anyone who has ever believed in me more than he has.  If I was granted one last thing before I died, I think I would ask for one more of his hugs.

And as I’m crying writing this (OK, so this day has left me a little emotional), I’m thanking God I have another day to let them know.