As I’ve gotten older, I’ve fallen away from believing that everything happens for a reason, or that fate brings us together.  But thinking about the past ten months in my life, I can’t help but think otherwise.  Break out the wine, kids, sh*t’s about to get cheesy.

It’s 3 a.m., and I am on the same couch that I was on nine months ago, three days into my Malta adventure.  Little did I know that the girls I barely knew from my program, who just happened to live on the same street as me, whose couch I was randomly crashing on temporarily due to my own flat hunting debacle…would mean so much to me in the past year.

Tonight, I am on this couch because Les and I are getting up early in the morning anyway — going to the Marsaxlokk fish market tomorrow.

The night before that, she was on this couch — I had had one (or two, or three) too many mojitos the night prior (thanks to our French friends at the Eurocup France v. Ukraine game, who saw my drink half-gone as a cue to get me another) and after taking care of me, let me take her bed.

Likely her thoughts as she carried my ass to her bed: “I can’t take you anywhere.”

And it wouldn’t be the first time.  But I digress…

Let me tell you a little bit about this picture: 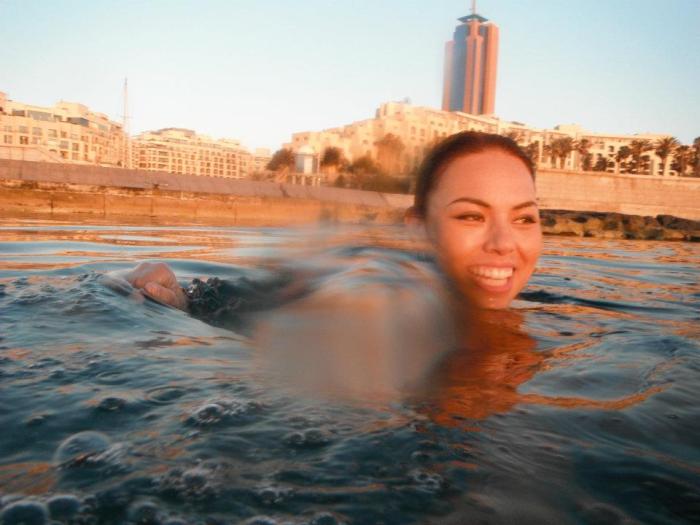 My camera broke on my cruise back in April, so I’ve been relying completely on Leslie’s bomb camera + underwater camera to steal my pictures from.  She uploaded this baby, simply (yet so appropriately) captioned: “Happy.”

And tell me why when I saw it, I got teary-eyed. 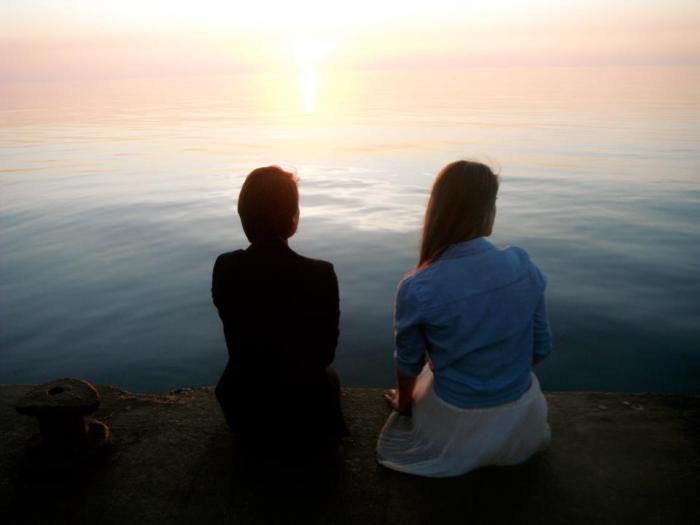 This was a late night turned early morning.  We were in the madness that is Paceville, like so many others on a typical Saturday night.  Drunken brawl sends a man flying into the trash can to my right, cop drinking a beer on the job, drunk girls unable to stand straight trying to get into the club, the nightlife still alive well into 4 a.m.

We decided to bounce, but grabbed some pizza (THE BEST) first. Then when I went to McDonald’s to satisfy my soft serve craving, we met some random Brits who were mesmerized by our accents: “It’s like Laguna Beach!” (TV show for all those who are unaware.)  Then they asked us where the best place was to see the sunrise.  So we took them to Portomaso, a waterfront area in St. Julian’s.

I should have predicted this: ten minutes into gazing at the gorgeous, still waters, reflecting the perfect sky now filled with the most beautiful shades of pink and orange, I go to find Les.  Yup, she’s already jumped in.

Two minutes later, I was in, too.

No thinking.  No pros and cons list gathered.  No over-analyzation.  No minding of my jellyfish phobia.  With the cool waters surrounding me, soothing me — my body, my mind, my soul — I floated on my back, closed my eyes, and found myself, yet again, in a place of sheer, indescribable happiness.

Whether I’d like to admit or not (and mostly I don’t because I’m stubborn), Leslie is the reason for some of the most spontaneous, happiest moments that I’ve had here.  I get giddy, stupid-happy, weird, crazy.  We have so much fun together when we’re both on this high.

She’s been here to hold me up, take care of me.  She came back for me after I got punched in the face by some random crazy B at the beach party (and I know she would have put those boxing skills to use had she been there with me).  We’ve had countless heart-to-hearts since the first week I met her.  We’ve been here for one another.  Through venting about classes or assignments.  Through sharing commonalities in terms of long-distance relationship woes or missing friends and family at home.  Through my breakdowns and meltdowns.  These talks have been therapeutic.

She is confident, she speaks her mind.  She has insecurities, sure, but who doesn’t?  But I never hear of them, no one does.  They probably exist for about two seconds in her own mind before she gives them an internal “f*ck you” and goes off to boxing class to kick the sh*t out of a punching bag.  And she’s inspired me to react to my own moments of self-doubt in the same way.

She is the definition of a true friend.  She stands up and fights for who and what she believes in.  She is there when you need her, she really listens.  And she knows all the right words to say — not because she feels obligated, but because it is coming straight from the heart.

Passion, that’s the perfect word to sum up who she is.

For food, for writing, for music, for her new friends, for her homies back at home, for her nieces and nephews, for her entire family, for life.  It has been contagious.  It has brought out the best in me.

To say that she has had an impact on this entire experience for me is a severe understatement.  And even after this experience is over and we both move back to California, the place we both call home…that b*tch is never getting rid of me.

I’ve said it many times, but I’ll say it again: Les, what the HELL would I have done without you here?

2 thoughts on “Sometimes, Les is all you need”