How could I NOT take the time to discuss Beyoncé’s performance at the Pepsi Super Bowl XLVII half-time show?

There were high expectations for this performance, and in my opinion, she lived up to the hype.  I feel like it is indisputable what an amazing entertainer she is.

AND Kelly and Michelle joined her onstage for a Destiny’s Child reunion?  I was screaming all alone in my house and freaking out like I was 12 again (and severely scared my poor pups who were snoozing by my side.  They don’t care much for football).

Though I must concede to the fact that Bey’s portion alone was a little bit risqué for young viewers, I loved it (plus, I don’t have kids so that’s not really my concern, I guess).  It was the performance we expect from her: amazing costume, custom-fit to outline and accentuate every curve of her already-incredible bod, a lot of hair flipping, badass vocals (lip synching or not, we know she has ’em), and killer dance moves.  She is mesmerizing. 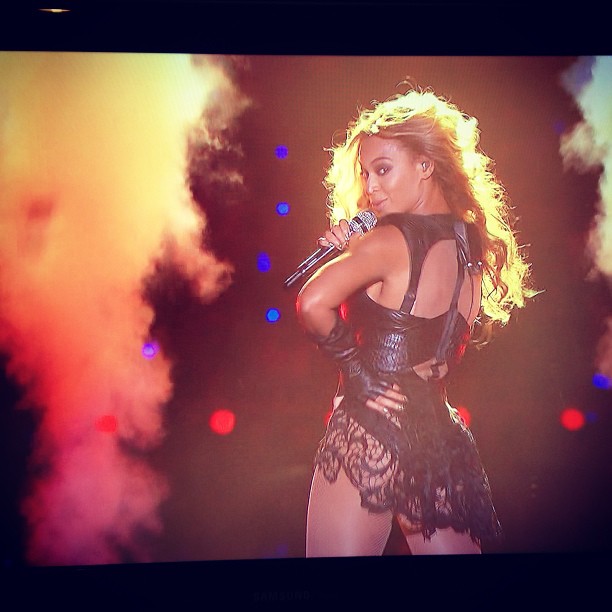 The main thing I would like to point out, something that I think is absolutely necessary, is the fact that Beyonce makes some crazy faces while she performs.  Tonight was no exception.

Not hating at all.  First of all, I love John Mayer.  King of melted/distorted face during performances.  That’s saying enough there.  But really, I love her more for it.  It is something I respect greatly.  Because that is what happens when you are going 110% and DGAF about anyone else.

I feel a kinship to this highly dramatic, external display of internal passion.  Coming from a girl who has been known for having a rather serious “game face” playing sports (running high school track, it was pretty much a sure bet that by the time I hit the last roundabout, I’d become transformed into a rapid bulldog–drooling, grunting, and with a strong underbite–as I pushed to the finish line), dancing at clubs…doing normal everyday things, really…

Go on and do your thing Bey.  You give your all.  They’re just jealous.  I love you.

(I took these photos, so please don’t steal them. They are very high-grade, aka iPhone point and shoot at TV screen.)